You know how some reality TV shows are so bad, they're good? Well it's not the case with this painting. You would be forgiven for wondering why I was trying to paint dust bunnies, but the truth is that I was trying to paint clouds. I wouldn't have posted this under normal circumstances, but because it is a 30 day challenge, I wanted to prove that I did actually do a painting today. 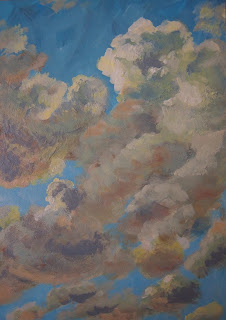 I had taken some progress shots and this was the best it looked before I lost the plot and overworked it.
I tried desperately to resuscitate it, but to no avail, in fact I just sent it to God all the sooner.
This is what it looks like now, just a carcass. 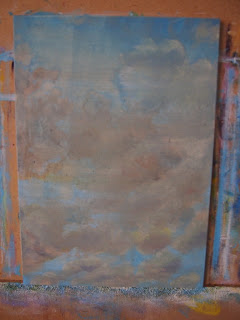 I felt very demoralised after I wiped the painting off in the hope of salvaging the board. Even that didn't go very well, it now has tufts of paper towel stuck to it. I had felt mentally scattered and a bit flat before embarking on my painting - now I felt mentally hung, drawn and quartered! What I did gain out of the exercise though, was a realisation that while I love painting clouds, it's only when they are in the distance. It seems I don't have a clue how to go about doing them close up. Although, now that I look at the photo again, I wonder if would be worth having another crack at it sometime.

Anyhoo, I got on with some other things and at around 3pm I had a little window of time to try doing another painting. Earlier in the day I 'd taken some photos of pansies flowering in my garden and decided to work from them. Now I'm thinking I might keep them up my sleeve and use to post for tomorrow's painting - which is within the rules! I was going to post them tonight but by the time I'd finished, the light was too poor for a good photograph.