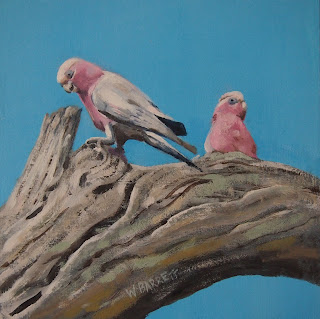 I'm finding it very hard to get around to painting as often as I'd like to. I feel there are so many things I should  - and want - to be doing that I don't know where to start. In the end I often don't start at all. Thankfully, I did finally begin working on a painting yesterday. I painted for an hour or so but the sunshine was calling my name, so I gardened for a couple of hours before returning to paint for another hour. I have just spent 2 more hours on it today. I have worked from a photo I posted a few months ago. I have always liked the photo but hadn't intended to paint from it as it was already a piece of art, but in my sluggish mental state, it looked like an easy option.

I should know by now that no subject matter is an easy option. It was a painstaking task to get the angles and stance correct on these cheeky birds to capture their quintessential galahishness. Or should that be galah-ity? Their antics do inspire hilarity!
Posted by Wendy Barrett at 23:45 31 comments: 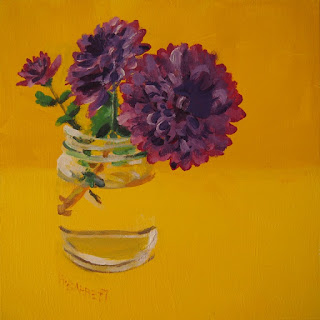 I had moments while painting this picture when I felt in touch with my inner chrysanthemum, but it only lasted while working on the left half of the main flower as you can see. Most of the time I felt I was channeling a dead thistle.

I had initially set it up to paint from life, but when I took a photo of it, I rather liked the way it had simplified the jar and so worked from that instead. The photo made the flowers look much pinker than they are so I tried to remain faithful to the real thing. 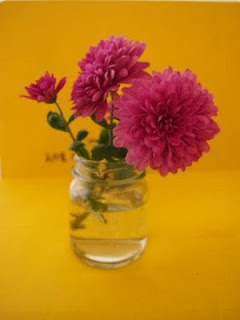 I have a lovely little patch of chrysanthemums still flowering in the garden. Unfortunately I have neglected them. They haven't been staked to allow them to stand up with dignity. So I thought I'd make up for it by honouring them in paint. The patch is made up of several different colours and types. They came to me initially as potted gifts for Mother's Days' past. 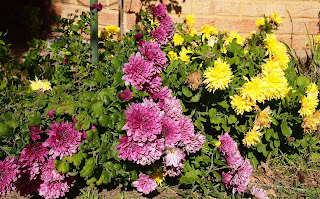