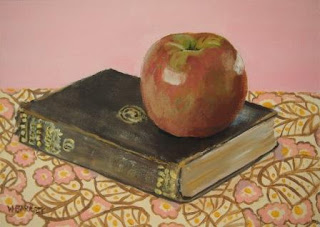 Acrylic on board 12.5cm x 18cm (5" x 7")
Back in the saddle again! It's over a month since my last painting session so I was very pleased to finish this off today after beginning it yesterday. I have painted this for my daughter's birthday. She is a keen reader and also has a penchant for collecting old books. This particular tome is a rather well loved 1907 edition of Great Expectations by Charles Dickens.  I'd had great expectations of being able to paint the title legibly on the spine, but I discovered very quickly that it was a case of unrealistic expectations.

It seems that every time I see my daughter ensconsed in a book, she is devouring a Fuji apple. They are not the reddest or prettiest apple ever invented, but they are by far the tastiest! 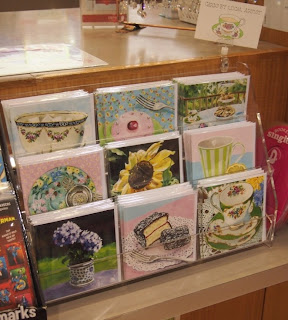 I have recently had a range of greeting cards printed up based on some of the paintings I've done over the past year. I now have them in half a dozen locations in the northern suburbs of Perth. Very exciting! Here is the link to my new publishing blog Banksia Lane Press
Posted by Wendy Barrett at 05:06 14 comments: 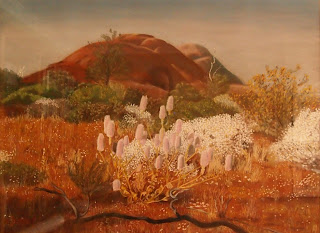 While my paintbrushes lie temporarily dormant, I have been scraping the barrel of my very small body of work prior to 2012 to find something to post . It was hard to get a good photo of this one as the reflections from the glass have added a few rather lively details - including my head - but hopefully it is clear enough to get the gist of it.

In the early 90s I first began to paint - initially with oils and then with pastels. This was my second piece in pastels. I worked from a photo I took while visiting Kata Tjuta in the Northern Territory in central Australia. Kata Tjuta (The Olgas) is in close proximity to Uluru (Ayers Rock). It is a very special part of the world where the sense of sacred timelessness is tangible. This particular visit was during spring, when the red earth comes alive with wildflowers (if the winter rains have been good). In the foreground is a Mulla Mulla bush which has very striking tufty lavender cone-like flowers.

The reason why I haven't been painting much of late is due to establishing a line of greeting cards based on my paintings. It has been very time consuming but I am up and running now and will soon post a link to my new publishing blog
Posted by Wendy Barrett at 20:20 19 comments: