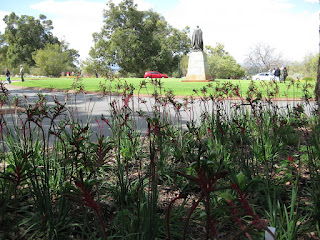 Today I went to the wildflower festival at Kings Park with Mum and Dad. As soon as we stepped out of the car park we were regaled with stunning mass plantings of everlastings.  Further along were the beautiful red and green kangaroo paws (above). 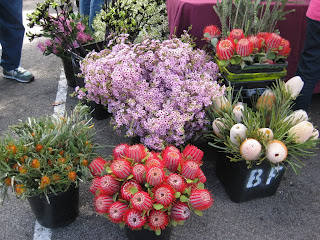 The banksias were particularly stunning at the cut wildflower stall. 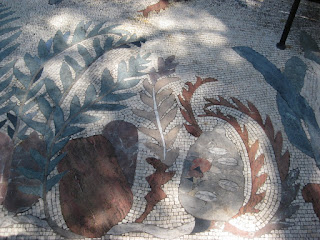 Here is a beautiful banksia mosaic that has been laid at a little rest-stop alongside one of the paths. 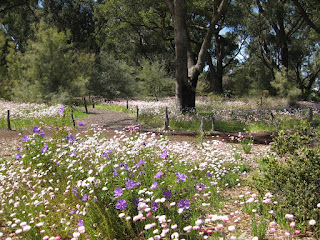 There were the usual swathes of everlastings sown throughout  the bush 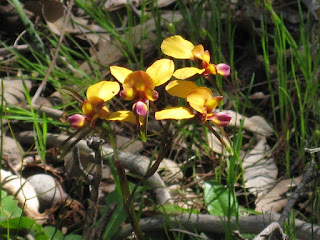 We had a short walk through the natural bushland as well to see if we could spot any orchid stragglers.  Only spotted one lone donkey orchid and quite a few cowslips.  It seems that overall the orchids flowered earlier this year, because last year at the same time it was oozing with them - including enamel orchids and red and white spider orchids. 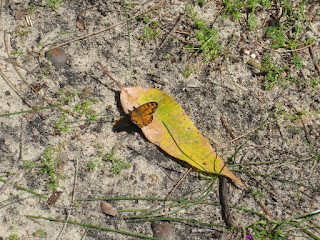 Butterfly sunning itself on a gum leaf. 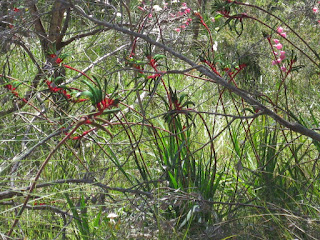 There was a riot of kangaroo paws growing naturally in the bush. 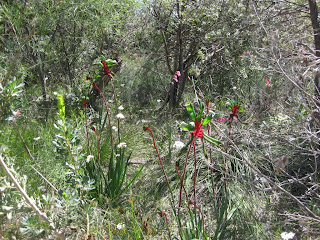 I bought a few kangaroo paw seedlings at the plant sale.  I'm afraid there have been quite a few casualties amongst the cuttings I was trying to grow from the propagation class.  But there are a few potential survivors that still have a slightly green hue.  I will keep my robust new specimens out of sight of my poor tortured cuttings.  I don't want them giving up hope before I've even got them into the ground. 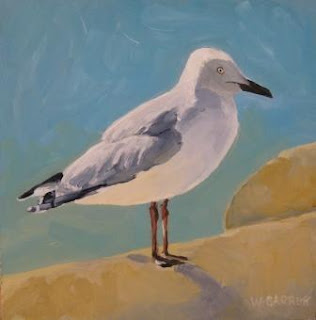 I painted this today with the intention of submitting it to the Daily Paintworks "Birdbrain" Challenge. However, my daughter has taken a shine to it and is ambivalent about me selling it.  I haven't offered anything for sale yet and this was to be the first one. Maybe next time!
Posted by Wendy Barrett at 22:29 No comments: 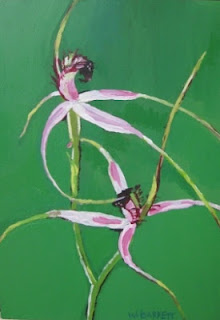 I thought I would continue with the theme of spring flowers for my painting this week.  This was painted from a photo I took last year on a bush walk.  I love the architecture of Australian flowers.

I have been checking my cuttings every morning and although some of them have turned their toes up, most of them still have some vestiges of chlorophyll coursing through their veins. I don't know if this means that some just take longer to die or if it means they are still in with a chance. Time will tell.
Posted by Wendy Barrett at 02:22 No comments: 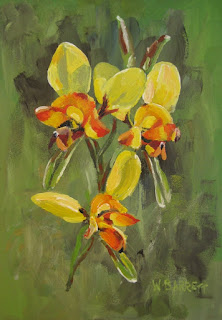 I don't feel I did any sort of justice to the real thing, so I will probably re-visit the subject later on.
Posted by Wendy Barrett at 19:32 No comments:

I don't have a painting to post today but instead some photos taken at our friends' (Bob and Kelly) - bush property where we visited this morning.  Despite poor winter rains this year it seems that the flowers are more prolific than ever.  The bush is awash with lushness and colour and there were flocks of orchids EVERYWHERE.  The photo below doesn't do it justice at all but have included it to give an idea of the general landscape. I was too focused on the orchids to take the time to get a better overall shot of the terrain. 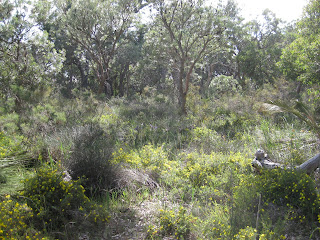 Hiding amongst the shrubs are all the little jewels. I think these are called Granny Bonnets. 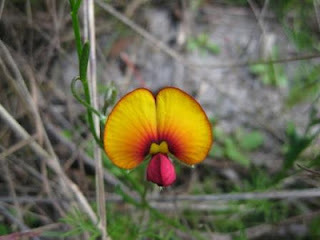 There were swathes of Donkey orchids everywhere.  They were very beefy specimens too.
This donkey orchid was one of many growing amongst the hibertia and pea flowers 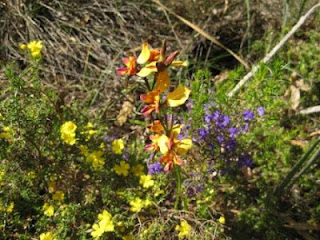 There were quite a few red spider orchids and green orchids too but donkey orchids and pink orchids reigned supreme today. 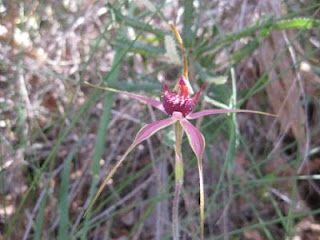 I took a heap of photos and hope to use some to paint from during the week.
We've had a few nice wildflower outings already this spring and I did a class in propagating native plants yesterday at Kings Park.  I have been cosseting my cuttings today and hoping I won't kill them with kindness.  I will be very excited if I am successful at growing natives from cuttings and seeds.

Posted by Wendy Barrett at 03:46 No comments: 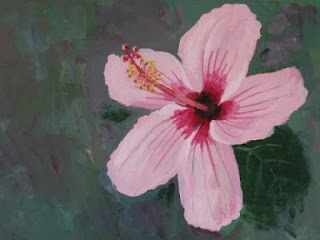 I didn't think I'd have time to paint today but at 3.30pm I decided I'd try something without too much detail.  I'm still finding it very hard to simplify, so even though this is nothing like what I had in mind when I started, I was happy-ish with the results. This painting took just under one and a half hours.  It felt like minutes!  I'm reeeeally enjoying painting on board rather than canvas.
Posted by Wendy Barrett at 02:22 No comments: 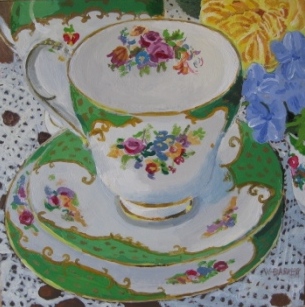