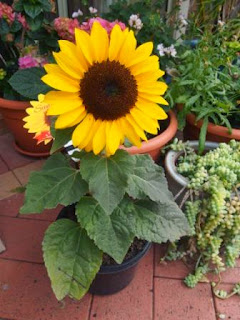 I haven't had time to paint just lately as there are other things afoot. So in the meantime I thought I'd post some photos I took the other day of simple things around the house and garden that bring me joy. I was at a garden centre the other day with one of my daughters and we had never seen such ridiculously cute sunflowers before. I couldn't restrain myself from buying one. It is equally beautiful from the back.
The cat that featured in one of my recent paintings is now a very regular visitor. 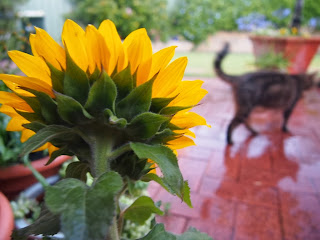 A ladybird thought it was beautiful too! 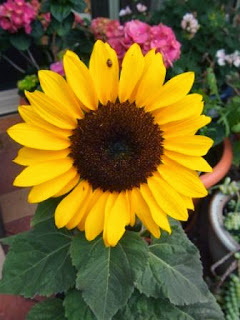 The flower below is a native trigger plant (Stylidium) that my mum and dad bought for me recently. You can see some smaller varieties at the base of the larger plant. If you prod the flowers a little hammer is triggered and springs across your fingernail. Of course the hammer wasn't designed with fingernails in mind but instead for visiting insects as a heavy handed tactic to ensure pollination .

I had only ever seen smaller varieties before I was given this larger specimen. It was in bud at the time and I waited with baited breath to see what the flowers would look like. It seemed they would be huge, with hammers big enough to bruise grown men. In the end they were smaller than anticipated but still beautiful. I feel a bit cruel when I trigger them off because they have to reset themselves. It must take up a bit of energy - particularly after having already expended energy by being cross that it wasn't an insect that had triggered them off in the first place. 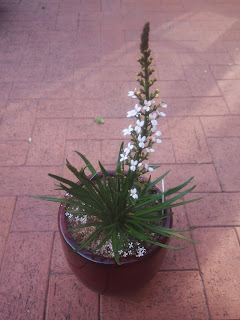 See the tiny little trigger flowers at the base. 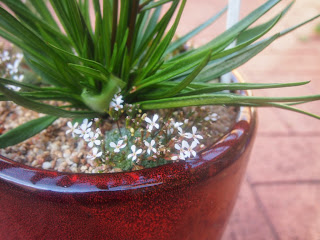 We were pleased to have our resident bob-tail goanna visit a couple of days ago. We only see it once or twice a year - usually with its mate. Hopefully its mate is still hale and hearty somewhere in the garden. 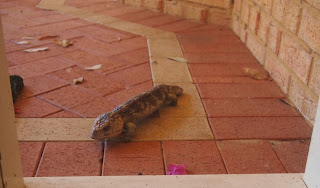 They blend in so well with the sand and leaf litter it's no wonder we don't see them more often. 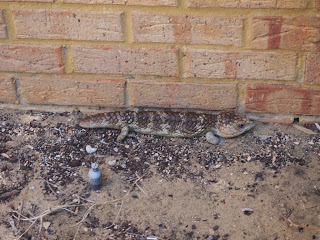 We have a nest with two Wattle bird chicks in it. Huge chicks about the same size as the mother. 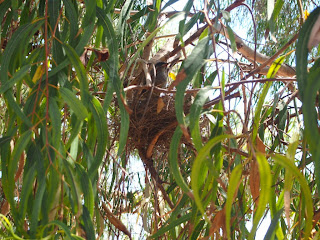 I haven't seen them for the past day or so, so maybe they are already fully fledged! 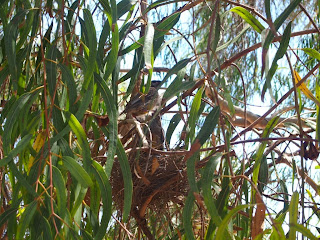 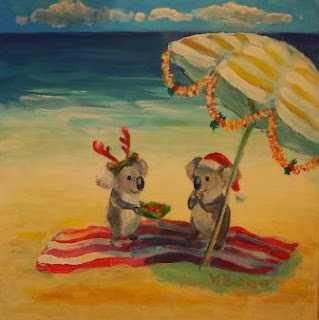 I finally reared up late this afternoon and finished off this picture. I was quite happy with how it came out in the end. The photo's not so great though as it was dark by the time I finished and this was taken in artificial light. Ironically, I have my daylight lamp which is great to paint by but it seemed to do weird things to the photo.

I was going for lots of great walks along the beach recently until I strained a few muscles last weekend. I feel I'll be ready to revive my walking routine tomorrow. The girls and I found some beautiful abalone shells on the beach last week. The three together are much smaller that the big one taken by itself.

Below the abalone are pictures of the beach taken a month or so ago when there was a lot of seaweed around. I find some types of seaweed to be very beautiful - like the specimen below. 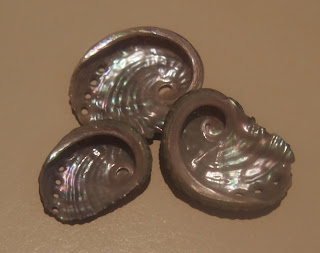 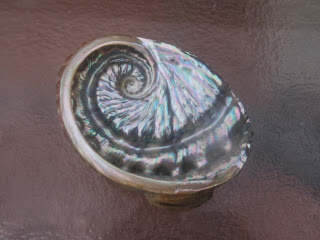 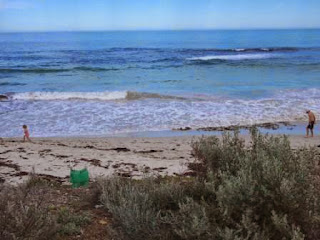 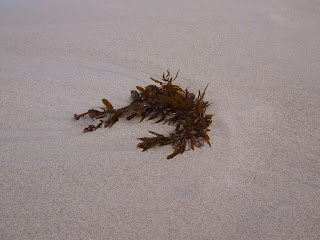 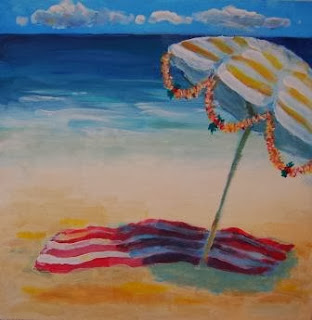 This is an illustration in progress. I was attempting to do a Christmas card illustration with an Australian theme to send to my overseas friends and family this year.Usually I do illustrations in watercolour. I begin with a pencil rough and when I'm happy with the design, I use my lightbox to trace it onto the thick, smooth paper ready to outline in ink and then paint in watercolour. I thought I'd try an illustration using acrylics for a change.
I invented this beach scene without a clear idea as to exactly what I was going to do with it. Once I got it to this point I decided I would add a couple of festive koala bears into the scene to liven it up - either sitting or standing on the beach towel. I felt it would be too easy to spoil what I'd already done if I began trying to paint the koalas without a preliminary drawing first. So I did that but then found it too hard to transfer it onto the board.
Doing the pencil rough stirred me up to do some more illustrating in my usual style as I quite miss it. I've barely done any illustrating since embarking on this acrylic journey at the beginning of last year. So I began to wonder if I should leave this painting in limbo for now and just do the whole thing in watercolour and ink. The indecision has caused me to do neither and now I feel there is a bit of a barrier to getting to it at all. How easy it is to derail a good run of painting! It isn't helped by the fact that my painting time is competing with my writing time and both are competing with all the other things that are currently on my plate. The writing has been winning over the painting lately. I've got quite a few hours under my belt this past week or so which I'm pleased about.
Posted by Wendy Barrett at 05:08 12 comments: