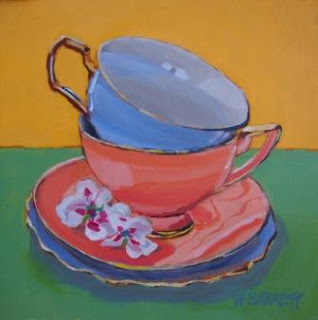 I thoroughly enjoyed myself painting this today.  I began drawing in the outline yesterday and finished it off today - 4 or 5 hours in total.  I had to interrupt the flow at one point to whiz out to collect my daughter and her friend from an outing.  I had dropped them off a couple of hours earlier and as we drove along the coast, the colours in the ocean were gob-smacking - lots of greens and aquas.  I was itching to capture the beauty. So when I went to collect them later I took my camera and stopped along the way to take a few shots.  The colours had lessened marginally owing to the sun's position.  It is always at it's most glorious, colour-wise, in the mornings and early afternoons owing to the glare later in the afternoon as the sun heads inevitably towards the horizon. The sea breeze was smacking in and all was perfect, except for not being able to linger, as I had girls to collect and a picture to paint. 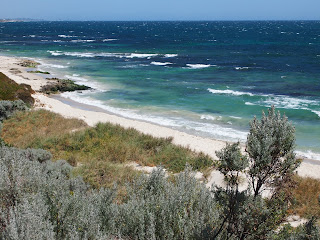 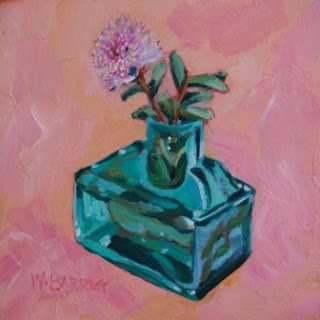 I am coming to realise that I enjoy painting shiny things.  So when I saw the Daily Paintworks glass challenge, I had to enter!

I have quite a few old bottles that I collected decades ago near old mining sites in the Western Australian goldfields, some abandoned since the days of the great gold-rushes.  I wouldn't have a clue as to what the original contents were for this odd shaped bottle.  Over the years from exposure to the sun, the colours in the glass have ripened into beautifully rich hues.

The flower is from a malaleuca (paper bark tree) growing in our garden.  Unfortunately its future is in peril because of needing to replace the fence.
Posted by Wendy Barrett at 02:46 6 comments: 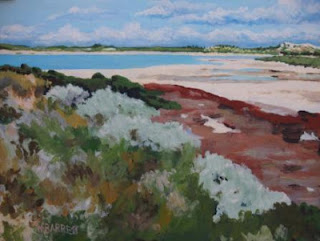 I wonder why it is that when I begin some paintings, I feel as clueless about how to approach it as if I've never painted before.  After finishing my second hydrangea painting the other week, I was basking in the glory of feeling I was really seeing some progress with my style and felt it was all onwards and upwards from there. This painting left me feeling like there was as much poetry in my brush as you'd find in a blocked drain. Nothing came easily and I didn't enjoy the process at all.

I guess it calls for more frequent painting to get more consistent results. I am also devoting time to writing, so I'm not sure how many hours I could spend a week on painting.  Does anyone have any thoughts on whether or not painting just once a week is enough to see real progress over the long term?

Here is the photo I used for reference. 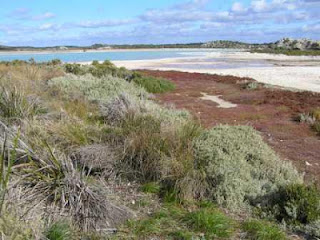 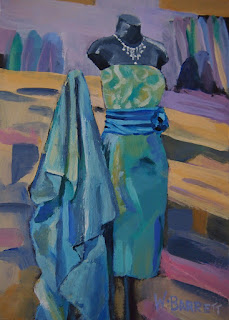 I painted this today for the Daily Paintworks fabric challenge. I painted from a photo I took a few months ago while buying fabric for my daughter's ballgown.  The shop assistants had kindly allowed me to take a few shots of their fabulous wares.  There were acres of glorious bolts of fabrics and displays such as this one.  There is nothing like browsing through the yet-to-be realised potential of beautiful fabrics to get the creative juices flowing.

Thankfully though, it wasn't me who would be let loose on the lovely fabric we bought.  As much as I would love to be a competent dress-maker, I've never really had a talent for it and have long since accepted the fact. Acceptance came quite easily really in the face of the hard evidence, and by my early twenties I decided to stick to cross-stitch and embroidery of which I was reasonably capable.  So I never once set foot outside in one of my own creations. Although, now that I think of it, I did make a green windcheater in my late teens and painted a huge frog on it in fabric paints. I cringe to admit that I did actually step foot outside in that one!!

My daughter created a beautiful ballgown from the fabrics we bought that day with the guidance of her amazing school sewing teacher.  She will wear it to her school ball in March.
Posted by Wendy Barrett at 23:09 13 comments: 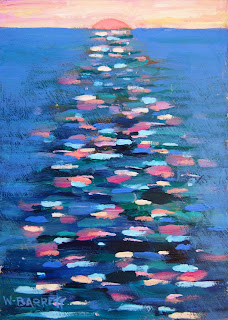 Today I began painting a still-life of a silver fork on some flowery fabric.  I had decided to do something to submit to the Daily Paintworks fabric challenge.  I had a moment of clarity just as I put brush to board that it wasn't going to end well. The pattern and colour of the fabric were way too ambitious for me, particularly after having tired myself out in the garden beforehand.  I wrestled with the painting for a while and it became more disastrous by the moment. After half an hour or so I admitted defeat as I could see it would go nowhere no matter how much time I spent on it. Today was the first time I've painted over something I'd made a start on. I'd already squandered some of my painting time so I needed something else to paint that wouldn't take too long.

On New Year's Eve my husband and I had trotted down to the beach just in time to see the sun set on the old year.   I hadn't taken my camera but the moment we got there I wished that I had.  The clouds were fairly nondescript so it wasn't the showiest of sunsets, but the simplicity of the colours were rather breathtaking.  After I had stopped bleating about wishing I'd brought my camera, I made the effort to become present and really take in everything around me. The colours in both the sky and water were amazing. I don't know if there was something more startling than usual about the colours being reflected on the water, or if I just found them so because I was paying closer attention than usual.

It was like watching a moving sea of jewels glittering as they rose and fell with the swell of the waves.  I tried to commit the colours to memory as I toyed with the idea of trying to paint the scene later.  I didn't really think I would end up getting around to it, but today I was desperate to just paint something quickly.  This is the first time I've painted from memory - and it shows!  But it was fun giving it a go.