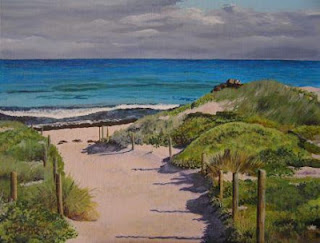 I've had a bout of bronchitis this past week which I think I now have the better of. This is partly responsible for falling fallow with painting in recent weeks. There has also been a lot happening on many fronts - including other creative projects, so in the interim I thought I'd post something I painted years ago.

This painting was my first ever attempt at using acrylic paints. I had done several works in pastels, oils and watercolours over the years but I wanted to give acrylics a go. I attended a weekly class to get some guidance on how to use the medium. This painting was executed over quite a long period - at least 6 months or maybe even a year. I rarely touched it in-between class time.

After this painting I had every intention of continuing with the medium and had already begun preparing what I was going to paint next, but I decided to stop going to the class with the aim of relying on self-motivation and painting at home. I did continue to create watercolour illustrations from time to time for birthday cards and suchlike, but it took until the beginning of 2012 to revisit my acrylic paints - now forlorn and congealing in their tubes.

It was my 10 day painting challenge that got me painting regularly again, with no more than 2 or so weeks passing between sessions. I still can't quite believe how effective the challenge was for kick-starting a regular painting habit. 10 days doesn't sound much in the face of the 30 day challenges that others have been doing - or of course the amazing daily painting habits of some talented creatures, but it was enough to get me started.
Hopefully my experience may encourage others to realise that new habits can begin with modest commitments. 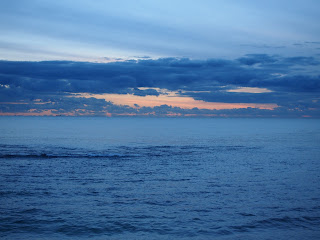 The days seem to be passing too quickly of late to find time to do a weekly painting. But I don't like to let moss grow on the post button, so I thought I'd post these photos I took last night of the stunning sunset over the Indian Ocean. Of course these images taken on an automatic setting are mere finger paintings compared to the real thing.

Soaking up a lovely ocean sunset was a fitting way to end the day after having finished reading a fantastic memoir that was set on the ocean - albeit the Pacific. Love With A Chance Of Drowning was one of the most entertaining books I've read in a long time. 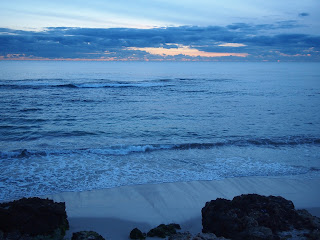 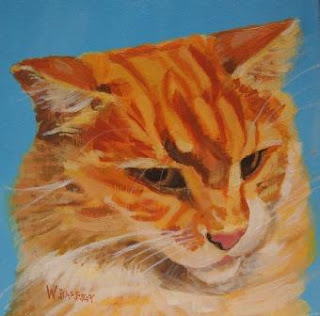 I'd been planning to get a photo of my friend Barbara's cat for quite some time to use as painting reference. Rusty had been proving rather elusive on the occasions when I'd visited, but I finally got my opportunity. He was already peeved that his house had been overrun by a gaggle of 17 year old girls for a birthday party. Having me take his photo was simply the last straw! Hence his long suffering look. 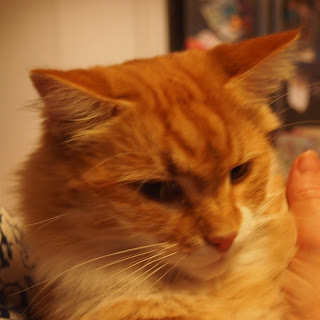 The photo itself was quite blurry so it was nice to do a painting of a photo that wasn't much chop in the first place. When a photo is already beautiful it seems pointless to paint from it, as it is a work of art in its own right. Which isn't to say that I haven't done such things in the past.