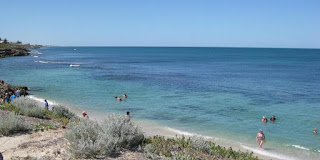 We had a lovely Christmas day that began with our traditional swim at the beach. I was relieved to see that the conditions were very calm and clear when we arrived - all the better to spot any unwelcome visitors.  Our state has had too many shark sightings and attacks in recent times to be able to swim with gay abandon anymore.  Not that I was ever particularly relaxed swimming in the ocean anyway, being shark phobic long before they became regular news items.  The temperature rose to nearly 40C today.  The sea breeze had limped in by midday but took till the late afternoon before it became refreshing.

There were a lot of people setting up on the beach, but they are out of sight in this photo owing to the angle of the shot.  Not so many in the water as usual and very few  further out.  Usually on a day like this there would be flotillas of snorkellers mooching around the reefs taking their new flippers and goggles out for a test run.

I'm hoping now that the Christmas frenzy is over I will have time to paint by the end of the week.

I hope everyone had a very merry day!
Posted by Wendy Barrett at 04:08